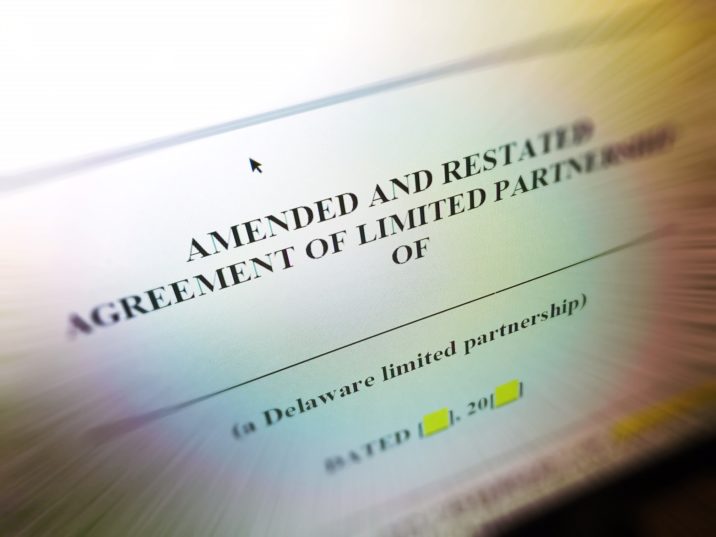 The Institutional Limited Partners Association has released its model limited partnership agreement for deals using a deal-by-deal waterfall structure, in hopes of sparking further debate about what terms are really are ‘market’ in the opaque and confidential world of fund LPAs. The organization released its whole-of-fund model LPA late last year, and recently updated some of its language.

“There’s no such thing as a perfect LPA,” said Christopher Hayes, senior policy counsel at ILPA. “We’re hoping that by putting this out, we can spark a conversation, and maybe even have a debate about what’s in our LPA in comparison to what’s in the market – because we can finally talk about an LPA that’s actually out there in the context of fund terms.”

Hayes adds that although whole-of-fund waterfalls naturally better align with ILPA principles, the organization had always planned to develop a DBD version and wants to provide as much flexibility as possible to encourage use.

One emerging manager has already expressed the desire to adopt the DBD LPA wholesale, said Hayes. Emerging managers are where ILPA hopes to see the most widespread adoption. But the document may also be used as a starting point for negotiating limited partnerships.

“The footnotes to the model LPAs provide a lot of guidance and a number of provisions offer choices, so that GPs and LPs can definitely use the documents as a starting point for negotiations, or as a benchmark,” said Won-Han Cheng, partner at K&L Gates and member of ILPA’s LPA Task Force, who has worked on the economic and tax aspects of both model LPAs.

Managers sometimes refer to provisions and terms in their LPAs as “market”, but investor representatives largely say the descriptor rarely if ever applies in private funds, where confidentiality is prized and competition fierce. The terms included and suggested in the model LPAs are based on actual terms surveyed by the 20 or so lawyers on the LPA Task Force and were circulated for industry comment.

As in the whole-of-fund version, ILPA makes bracketed recommendations where no real ‘market’ provisions or terms really exist. For example, ILPA suggests an 8 percent preferred return, though hurdle rates can be anywhere from 6 to 9 percent, in some cases. And although valuations methods differ from firm to firm, ILPA suggests managers use the FASB ASC 820 ‘fair value measurement’.

“Having the ability to negotiate these terms is really important, and ILPA’s model LPAs allow for a certain level of flexibility,” said Margaret Niles, also a partner at K&L Gates and a LPA Task Force member.

The DBD model LPA is being released alongside a 15-page term sheet summarizing its key contents for the less legally minded. A term sheet was also made available for the whole-of-funds version earlier this month.

Clawbacks are, of course, among the differences to the whole-of-fund approach that the new LPA addresses, since deal-by-deal structures leave open the possibility of over-distribution of carried interest to fund manager recipients. In addition to its recommended deposit of 30 percent of GP distributions into an escrow account, ILPA recommends annual interim clawback periods beginning one year from the end of the commitment period, implementing a hypothetical liquidation of the fund to determine whether clawbacks will be necessary. If they would be, the terms of the model LPA stipulate the GP notify LPs within 10 days, along with detailed calculations, and contribute that clawback to the fund, subject to certain other conditions.

Chen said the distribution waterfall underwent significant changes from the whole-of-fund version. Both that and clawbacks are addressed in section 14 of the DBD model LPA.

The new model LPA also incorporates recent changes, released earlier this month, to ILPA’s whole-of-fund model LPA, including what lawyers who helped develop it say is language that strengthens investor protections in areas like clawbacks, general partner expenses, fiduciary duty, and GP removal and fund termination, among others.

The definition of fiduciary duty – a current theater of battle between some LPs and their GPs – in both model LPAs is expanded from the original 2019 whole-of-funds version. “The original language provides a prudent investor standard for fiduciary duties,” Niles said.

But some felt that language popping up in some LPAs, seeming to give GPs some leeway in their discretion over whose interests to serve, needed nipping in the bud. The new model LPA language states that, no matter what subjective standard is used – “sole discretion”, “good faith” or otherwise – managers and GPs “shall not” place their or affiliates interests ahead of LPs or the fund. “The revised LPAs make clear for the avoidance of doubt that GPs may not put their interests ahead of those of the LPs,” said Niles.

A recent ILPA survey of 70 LPs showed that 71 percent saw fiduciary duties “contractually modified or eliminated altogether over the last 12 months in at least 50 percent of the funds” they invested in.

ILPA is generally wary of what it sees as a continuous shift of expenses to funds. Some LPAs are loosely defined to allow most expenses to be allocated to a fund; something investors see as problematic, especially in an age of increased outsourcing.