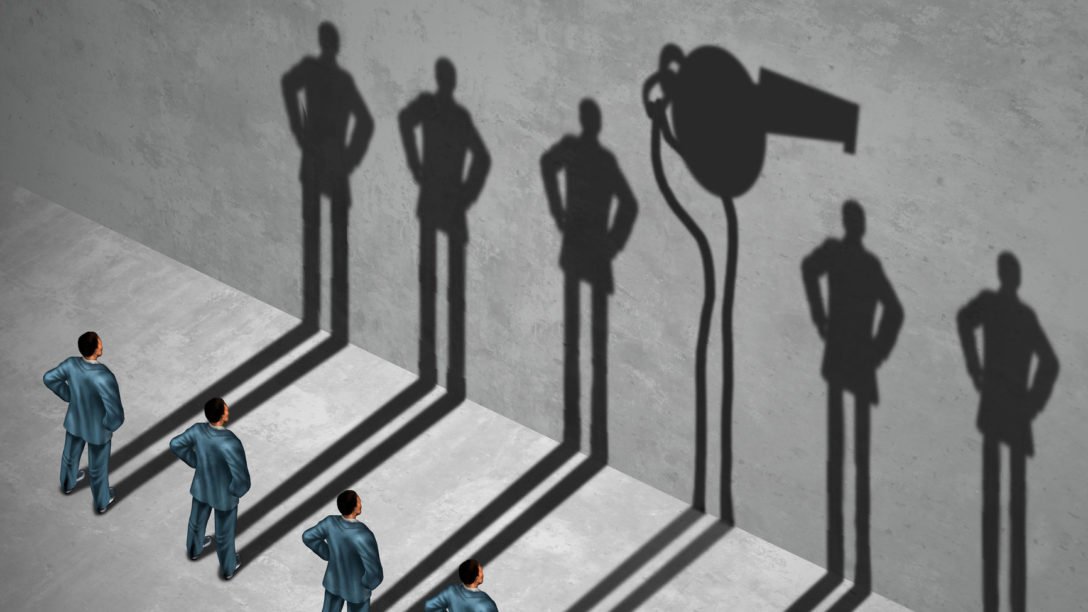 It takes guts to be a whistleblower, as Toni Caiazzo Neff can confirm. Yet even she admits, “I was naïve going into this.”

Days after the compliance officer sued her firm, claiming she was fired for doing her job, Caiazzo Neff recounted to affiliate title Regulatory Compliance Watch the threats, sabotage and surveillance she’s endured after serving as a whistleblower in the GPB Capital Holdings case.

You may remember our coverage of the GPB case because it has featured arrests, ties to the Church of Scientology and even whispers of Russian mob connections. One message she has for other whistleblowers is “things can get ugly.”

The intimidation against Caiazzo Neff, a former compliance officer, peaked two years ago, just days before she was due to hold a news conference in New York to talk about her allegations of fraud. She had planned a rare day of extensive driving from her Eastern Pennsylvania home.

“During the drive, I started hearing a thumping,” recalled Caiazzo Neff. “I took a turn and almost lost control of my car.” She would later learn that someone had loosened all of the lug nuts holding her tires in place. Luckily, she had decided at the last minute to take slower back roads rather than the brisk interstate—a move that may have saved her life.

“The lug nut incident was sending a message … to not go to New York. To not do the press conference,” she believes. “I had concerns about my physical safety. I’ll be honest about that.”

She showed at the press conference, nonetheless. Another message she has for whistleblowers: “Be persistent, confident and never give up.”

Somehow the villains knew she had planned a long drive that next day. After the sabotage, the FBI advised her to leave all social media, secure a new cell phone and change her e-mail address. “I went underground for a while,” she says. She also purchased a home security system, after a neighbor reported seeing a large, glaring man staring at Caiazzo Neff’s house one day. The man oddly ignored the neighbor’s inquiries and strangely stood his ground.

Most whistleblowers aren’t going to be confronted with the types of characters Caiazzo Neff ran into but they aren’t likely to win employee-of-the-year awards either.

“Moral courage and integrity come at a cost,” Caiazzo Neff counsels. “Be prepared for character assassination by the organization.”

“You may be drummed out of the industry,” she warns. She now works in a different field.

Should your employer suspect or know you’re the whistleblower, expect that it will attempt to discredit you. “They want to silence you,” she states.

“Be prepared to be ostracized by peers and friends at work,” she continues. “They may support you secretly but they don’t want to get involved publicly.”

“Keep in mind that Human Resources and inside counsel are not on your side. They’re there to protect the organization,” she warns. Document everything you can to protect yourself and help to make your case.

Another lesson she learned is don’t go to FINRA, even if it’s your primary regulator. Bring your complaint to the SEC instead, a necessary step to qualify for anti-retaliation protections, she suggested. Caiazzo Neff eventually did raise a complaint with the SEC.

“There were times when it was hell,” she says of the last three years. However, “if I didn’t say anything, I would never be able to look myself in the mirror… I would do it again,” she adds.