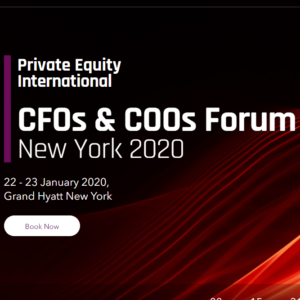 The retail question: The private markets are indeed becoming the new public markets, and one of the top issues in private equity in the coming year will be the SEC’s ambition to open the door to private markets for retail investors. At last week’s inaugural Asset Management Advisory Meeting, held by the SEC, (a recording of the event is yet to be posted), Blackstone’s chief legal officer and Apollo’s head of client and product solutions stoked the SEC’s argument to do just that. IPOs are flagging, private markets perform better and get higher returns than public markets, etc. But Blackstone’s John Finley says the giant has “absolutely no interest in an expansion unless it’s done right.”

On Wednesday night, I’ll be interviewing the SEC’s head of CorpFin, Bill Hinman, at the Private Equity International CFOs & COOs Forum New York 2020 at the Grand Hyatt in New York, and we’ll be talking at length about this. Hinman, though his division wasn’t behind the SEC’s initiative (that was Dalia Blass’s Investment Management division), was recommended by chairman Jay Clayton himself for the interview – they’re said to be in lock-step on the SEC’s big initiatives.

We’ll touch on a few topics (how some SEC proposals regarding public companies may affect PE strategies, for example) but the big thing is retail, retail, retail. One big question mark is whether, given the high competition between LPs to even get into the big funds, and the potential increase in compliance costs (not to mention downside risk of negative public attention should something go wrong), retail investors will practically only get access to the lowest quality funds? Apollo and Blackstone obviously think not.

The Forum: It kicks off on Tuesday night with cocktails at the Grand Hyatt. (You can download the brochure, agenda and preliminary attendee list, here). Private Funds CFO will have a stand in the reception area and we’ll be conducting some on-site video interviews – so please come by if you want to share your thoughts on major topics in private markets, talk about new initiatives at your funds, or even just to say hello. Our whole team will be there, so we hope to meet as many of you as we can!

Other highlights at the event:

There are a host of other interesting sessions. I’m particularly interested in hearing what panelists will have to say about the maturing secondary market on Tuesday, and on succession planning and compensation on Wednesday.

Partners lawsuit: On Friday, I wrote about a lawsuit freight-rail operator MidRail filed against private equity giant Partners Group. MidRail accuses the firm of breaching an NDA that cost it $100 million upfront in an acquisition auction process, plus ongoing damages due to loss of competitive edge as a result. The suit centers around a partnership the two agreed to in pursuit of potential acquisitions. MidRail was providing industry “know-how” including proprietary information with high commercial value, and Partners was stumping up the investment cash. But the partnership fell apart when MidRail says Partners used the former’s proprietary information to pursue a target on its own. MidRail ended up with a different financial backer and successfully purchased the target, but says it had to put up an extra $100 million when it found out it was essentially bidding against itself. Partners denies the claims.