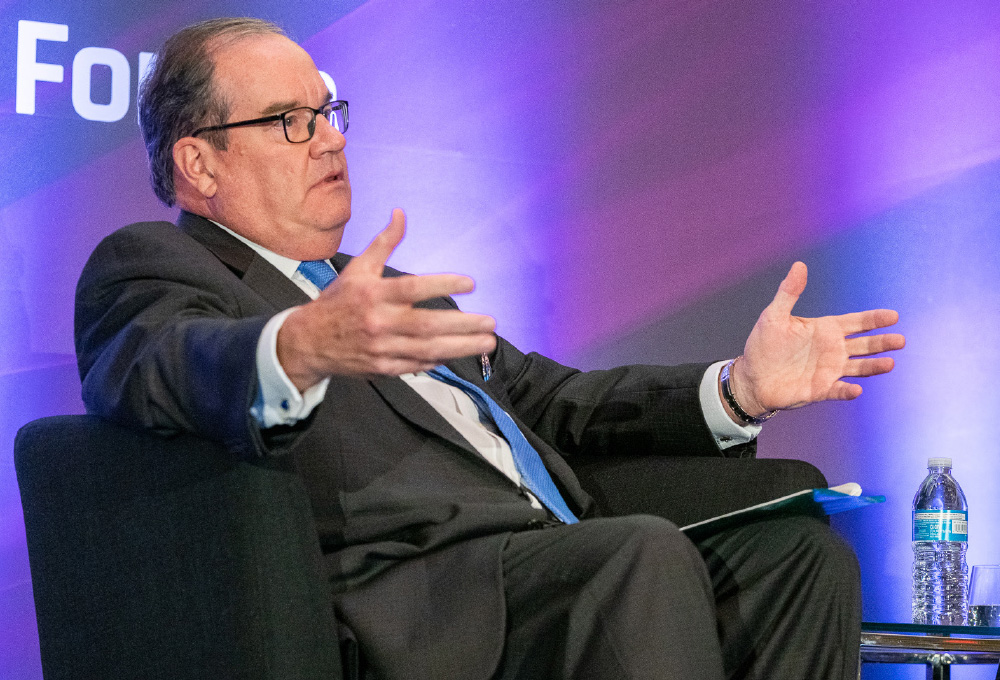 An 18-year veteran of Neuberger Berman, Brien Smith has seen pretty much all of the era-defining changes to the industry. His tenure has seen Lehman Brothers’ acquisition in 2003, through the investment bank’s spectacular collapse in 2008, and the ensuing years of regulatory change, unprecedented low global rates, voracious inflows into credit and alternative investments and, of course, the intensifying global technology arms race.

The COO spoke with Isobel Markham, senior editor of sister title Private Equity International, at PEI’s CFOs & COOs Forum, where he surmised that anti-money laundering (AML) and know-your-client (KYC) regulations will inevitably be translated from Europe to the US. He also explained his lack of optimism for the future of retail investment in private markets, the tenuous future of subscription credit lines, and he bemoaned the lack of institutional memory in the industry as we head toward the end – whenever it may be – of this cycle.

The European (regs) are coming

“I don’t have a timeline, but if I were to guess that anything is coming [from Europe] it’s AML and KYC” regulations, says Smith, adding that some form of US compliance with European standards on that front is likely in the next five to 10 years. In his remarks on regulatory developments, Smith looked to Europe as the leader of many profound and international regulatory initiatives, such as the General Data Protection Regulation (GDPR) and ESG.

AML and KYC regulation ensure that only legitimate, non-criminal investors contribute to your funds, and requires institutions to monitor customer transactions and report suspicious behavior. Of course, US PE firms are familiar with such measures – but it may be a long time before full compliance reporting is required by their regulators. Many private funds reportedly limit their AML process to checking the Office of Foreign Assets Control sanctions list.

“We’re getting very close to getting full European compliance,” Smith says. “It’s a lot of regulation, but really I think it’s best practices.” He views compliance to European regulation as a way for the US market to stay competitive with Europe.

There have been attempts to push AML requirements onto private funds. In 2002, the Financial Crimes Enforcement Network proposed AML rules under the Bank Secrecy Act for registered investment advisors, later withdrawing the proposal, and offering a new version in 2015. But a former FinCEN official involved with drafting the original rule told Private Funds CFO that the Treasury hasn’t signaled an interest in adopting it.

Smith sees Europe as the standard setter in a few areas, including ESG and GDPR, both of which have already had major impacts on the US market.

‘Not optimistic’ about retail

Despite public endorsement for initiatives to expand access to private markets to retail investors by the likes of Blackstone, Apollo and KKR – and a push by the SEC to update the definition of ‘accredited investors’ to that end – Smith isn’t sanguine about the prospects for an opening of the retail floodgates.

“Congress isn’t spending any time thinking about how individuals’ retirements can expand access to PE funds,” Smith says. Regardless of concrete efforts by the SEC, and large firms positioning themselves to capitalize on this new investor pool, Smith points to the glacial pace of regulation as proof of his outlook.

Smith notes that many rules meant to protect retail investors were set after the Great Depression, nearly a century ago. “So I’m not optimistic,” he says, that the rules most prohibitive to retail involvement in the sector will be changed soon.

Neuberger Berman offers two options for individuals in its products listed on the London Stock Exchange, including a closed-end fund the firm has been operating for more than a decade. But “having that type of structure in the US is preventative,” and Smith doesn’t see that dynamic changing very soon.

“We don’t have defined contribution plans as much because, structurally, it’s almost impossible to get that asset in there,” he says, adding: “401(k)s are a non-starter.”

In searching for a technology provider for its private credit business, Smith and the rest of the firm had a realization when mergers and buyouts in the software-as-a-service (SaaS)  sector began to threaten what progress they had made adapting to certain technology. Smith recalls the time Neuberger Berman’s SaaS provider was acquired shortly after the firm signed it on.

“Once you’re in a SaaS environment, you have control over the data, and you can increase the price.” When tech-focused PE firms buy up your tech provider, your prices will always go up. “It doesn’t matter if it’s Vista or Thoma Bravo or any firm, they were all going to raise the price on us. We knew exactly what was going to happen just by hearing the news.”

The Neuberger Berman COO marked that realization as a turning point in the firm’s data strategy. Should one of their vendors be acquired, or another launch a break-through service Neuberger wants in on, the firm would need to be agile. “That was a wake-up in our organization,” Smith says. “We are taking steps in our business so that we are not dependent on any one single vendor. Our objective is to be in a mode where in 12-18 months we can migrate to a new product.”

“I think the biggest challenge we face is a whole generation of people in private equity, who are now making partner, who have never been through a recession”

As the economy heads toward an end to the longest economic expansion in US history, it’s anyone’s guess as to what changes the industry may undergo as the result of a downturn. But Smith predicted that one thing unlikely to survive a serious contraction is credit lines.

“My expectation is five years and they’ll go away,” Smith says. Once the next downturn begins, putting pressure on the banks that provide the lines, Smith thinks willingness to extend them will disappear like “leaves in the wind.”

But perhaps the most serious concern is the lack of institutional experience of a prolonged downturn.

“I think the biggest challenge we face is a whole generation of people in private equity, who are now making partner, who have never been through a recession. Side by side, there is another group of people whose most recent recollection is the worst downturn since the [Great Depression],” he said, adding that the mindset of the two groups is “totally different” from one another.

Educating employees who don’t understand what a real downturn is like, should be a priority, he suggested, emphasizing that “we are in an illiquid asset class, so I think we need to be cautious.”