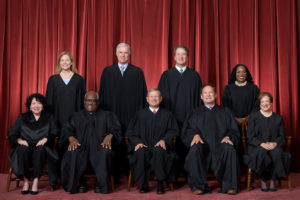 The case, SEC v. Michelle Cochran, challenges the constitutionality of the SEC ALJs because the president technically doesn’t have the authority to fire them; only Commissioners can.

Oral arguments in the case were voiced November 7. Based solely on the questioning by the justices, the days could be numbered for the SEC’s ALJs. A companion case that challenges the legitimacy of the FTC’s ALJs was also taken up by the SCOTUS on the same day.

In 2016, the SEC charged a Texas accountant, Michelle Cochran, with violating PCAOB accounting standards. She ultimately received a $22,500 fine and a five-year ban. However, Cochran appealed to the federal courts, eventually leading to the SCOTUS hearing, as reported by affiliate title Regulatory Compliance Watch.

“This case illustrates the crucial importance of this district court jurisdiction for every day Americans who find themselves trapped before an unconstitutional agency decisionmaker,” Gregory Garre, a partner with Latham & Watkins in Washington, DC, and Cochran’s attorney told justices.

“The SEC acts as prosecutor, judge and, in effect, executor in its own proceedings, all of which give it an extraordinary homecourt advantage.”

According to Cochran’s filing with the High Court: “The harms at stake here are far more serious than mere expense and annoyance. The SEC’s prolonged administrative adjudications inflict a devastating toll on the Americans whose lives, reputations and ability to earn a living are upended by the mere initiation of those proceedings. An SEC charge and press release often operate as an occupational death sentence.”

Garre asks the SCOTUS to rule that the SEC ALJ setting remains unconstitutional and to halt the Commission’s case against his client.

Four years ago the High Court, in the Lucia case involving an investment adviser (RCW, June 22, 2018), determined the SEC’s ALJs were unconstitutional because commissioners didn’t appoint them. The commissioners promptly rectified the situation by appointing their ALJs.

At the time, then Supreme Court Justice Stephen Breyer forecast that a future case would come before the High Court challenging the constitutionality of the SEC ALJs based on who can terminate them. He proved prescient.

Malcolm Stewart, deputy solicitor general in the Department of Justice, presenting the SEC’s side, cited a series of legal cases, dating at least to 1912, that held that legal challenges like Cochran’s must wait “until the proceedings culminate in an order or rule that sets legal obligations.”

A plaintiff before an SEC ALJ can appeal his case to the full Commission, and then to federal appeals courts. Cochran argues the SEC ALJs are unconstitutional, rendering her case moot.

While some of the justices noted legal text that supports Stewart’s view, Justice Brett Kavanaugh expressed concerns that SEC enforcement cases have been known to have “taken seven years or something to wind its way through” the system. Giving federal courts an earlier say could speed up these cases, he suggested.

The import of the Cochran case on SEC registrants who could face Commission enforcement actions is encapsulated by Peggy Little, senior litigation counsel for the New Civil Liberties Alliance in Washington, DC. The NCLA has represented Cochran and opposes the so-called federal administrative state.

“Waiting to challenge the adjudicator after he’s adjudicated doesn’t seem like the right order of things,” she told RCW. While the SEC could amend the initial defect with its ALJs, it can’t resolve the one raised by Cochran if the High Court agrees with her client because federal laws govern the ability to hire and fire agency ALJs.

“The SEC can’t change those statutes. Only Congress can.”

It’s difficult to imagine a Congress so divided would be able to address a constitutional remedy should the SCOTUS find for Cochran.

If that were the case, SEC commissioners could decide enforcement actions on their own but it’s more likely future cases would all go to federal courts.