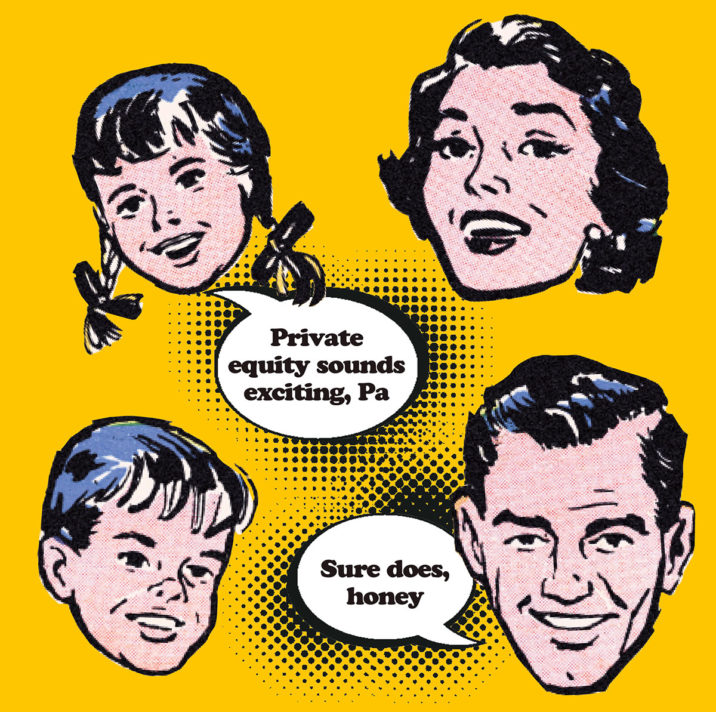 In the late 1990s, Lawrence Calcano, then an executive with Goldman Sachs, was passing through LaGuardia Airport when he met a fellow investor. This was a heroic phase of capitalism when airports in wealthy cities had kiosks with QuoTron terminals for the walk-in mom-and-pop investor. A baggage handler on his break was one of the many in line and was especially keen on a Texas big box store that Calcano himself had invested in.

When he asked the baggage handler about the company, however, the man shrugged. “He didn’t know what the company did,” Calcano recalls. “He just knew it was a hot internet stock.”

Calcano survived the loss and he’s now the CEO of iCapital, a business that automates the alternative investing process for private funds and advisors and their high-net-worth investors.

Today, the average American has to work nearly 128 hours before she can afford a single stock in an S&P 500 company. When Calcano hears jubilation over Washington, DC’s recent, tentative efforts to bring more retail investors into private funds, he tells everyone to pause for breath.

“This is a long-term process,” he says. “The CFOs should not expect that they’re going to snap their fingers and $100 million is going to show up.”

American regulators seem to agree with Calcano. This summer, the Department of Labor and the US Securities and Exchange Commission each made gestures that were at once dramatic and muted: DoL in June by issuing guidance allowing certain Employee Retirement Income Security Act pension plan managers to invest in some private funds; the SEC in August by widening, if marginally, the definition of accredited investors.

Those gestures were pockmarked with provisos, caveats and addenda, giving weight to the Washington cliché that “the process is the punishment.” They weren’t, however, just symbolically important: the ERISA market, for instance, is valued at $7.1 trillion.

Still, it’s important to grasp what DoL’s June guidance letter did not say: that retail investors could invest in private funds.

It did say that pension fund fiduciaries may offer some private funds “as part of a multi-asset class vehicle structured as a custom target date, target risk, or balanced fund” and not be sued for it.

Further, “each asset allocation fund with a private equity component would have a sufficient pool of assets to diversify the exposure of plan participants to the private equity investments with other investments in a range of asset classes with different risk and return characteristics and investment horizons.”

In June, two weeks after DoL issued its ERISA guidance, the SEC released a first-of-its-kind risk alert for private funds, warning that the industry was rife with problems in most corners of its business, from allocations and valuations to side letters.

The scale of it

Beyond the regulatory risks, there are also financial, cultural and even structural problems for private funds to consider as they weigh the costs and benefits of courting Mr and Ms America.

“How do you market to this asset class? How do you manage the asset class?” Calcano asks. “You’ve got an infrastructure, presumably, set up for institutional investors. You’re set up for small numbers of large checks. In retail, it’s a totally different inflow. You’re moving to small checks from large numbers of people, and for each one of them there are anti-money laundering requirements, there are know-your-customer rules, there are investor relations, and a lot of the GPs just aren’t set up to do it.”

Before they clean up, in other words, private funds will have to clean house.

DoL’s letter was addressed to Pantheon Ventures and Partners Group, who spent the better part of a decade working on a narrow, defined contribution-with-private-funds-element plan they thought might win DoL’s blessing.

“There will be a very high bar for the administrating of these vehicles,” Doug Keller, head of private wealth and defined contributions at Pantheon, tells Private Funds CFO.

“All this has very big regulatory components. That’s sort of what makes the operational, administrative burdens so difficult – there’s a heavy overlay.”

Some experts see DoL’s guidance as a kind of back-door regulation: by making plan fiduciaries responsible for the investments, regulators all but guarantee that private funds will have to satisfy fiduciary requirements in the Investment Company and Investment Advisers Acts.

Any fund hoping to woo retail pensioners will certainly have to reassure fiduciaries that they are capable of limiting litigation risks, particularly over fees and liquidity, Keller says.

“Illiquidity, just intellectually, doesn’t fit into the minds of the 401(k) community,” he says, since 401(k)s mostly invest in liquid stocks and bonds. “And the vast majority of litigation is over fees.”

The good news, he adds, is that private funds managers can read DoL’s guidance as a road map to check if they’re in the right area for retail pensioners. Retail investors aren’t new to private funds. Defined benefit plans, many of them state and local government pensions, now have years of experience in private fund investments.

“We’re a lot further along than people think, than the markets think,” says Jonathan Epstein, founder and president of the Defined Contribution Alternatives Association, or DCALTA, a trade group that helped put together the lobbying meeting that resulted in DoL’s June guidance letter. “I think private equity is extremely teed up to enter the marketplace.”

Given pension fiduciaries’ worries, there may be market pressure for private funds to sacrifice some of their privacy.

“There is such a big element of trust,” says Robert Blecher, a consultant at PwC’s strategy consulting unit Strategy&. “By their very nature, private investments aren’t the most transparent.”

On the plus side, private funds that are open and frequent in their disclosures may have a distinct market advantage, Blecher adds.

“It’s something that could be changed and could be very enticing for people.”

“Illiquidity, just intellectually, doesn’t fit into the minds of the 401(k) community … and the vast majority of litigation is over fees”
Doug Keller
Pantheon Ventures

Larger, brand name funds, then, have an early advantage because they already have recognition. Blackstone and Apollo have been mustard-keen on bringing more retail investors into the market, sending their top lobbyists to an SEC roundtable just last year.

That advantage, however, is neither decisive nor permanent, Blecher says. Mid-sized private equity real estate firms with exchange traded funds, for instance, might be in just the right spot for retail pensioners “because people understand what ETFs are and what indexing is … and it’s already used in retail real estate investments.”

Calcano says that funds’ first step should be to put “ambassadors … into the field, looking for partnerships.”

He adds: “It could be the CFO spends a little of his or her time meeting … with custodians, meeting with administrators, meeting with some of the constituents.

“Try to get on the phone with one of those larger managers who have actively embraced the HNW advisory channel and say, ‘How did you go about this? What have you learned?’”

As regulators take the long and winding road to bringing Main Street into private funds, new sprouts are springing up along the shoulder in the form of third-party web platforms that may help freshen private funds’ scents for pension plan fiduciaries.

“With GPs, we’re not quite there yet to say, ‘These are our terms, take it or leave it,’” says Jens Beyrich, associate general counsel and head of regulatory and compliance for Moonfare, a Berlin-based company that connects ordinary investors in Europe and Asia with private funds. “These GPs want to figure out ways to approach the retail markets. These conversations with GPs are very bespoke.”

Founded in 2016 by former KKR executive Steffen Pauls, Moonfare today traffics about $300 million in assets, most of them directed to private funds in Luxembourg.

It promises that it can take on the regulatory burden for parties – and Europe’s regulations and laws are even more complex than the US – while still easing tensions over secrecy and disclosures.

Among other things, Moonfare offers investor questionnaires tailored to each of the jurisdictions in which it does business. It hasn’t been easy, but it seems to be getting better as the parties become accustomed to one another.

“We, of course, want to provide as much as transparency and disclosure to our investors as we can. But you can’t go from zero to 100, certainly not in two years,” Beyrich says. “There have to be compromises.”

A manager could, he adds, say “maybe I’m not disclosing every single name on that portfolio, but I can disclose things such as the types of deals this fund pursues.” The industry has to get regulators “comfortable with the level of information we’re providing to investors, more than what’s strictly required under the law.”

The good news, though, is that private funds CFOs have time to take the measure of their own business before they start to approach retail investors.

That doesn’t mean the sky is the limit, iCapital’s Calcano warns, with his LaGuardia baggage handler in mind. Missteps by private funds could well be paid for by the entire market.

“I think this is a great thing. Investors should have the ability to invest in this asset class,” he says.

“But I’d love to see everybody go about it the right way.”