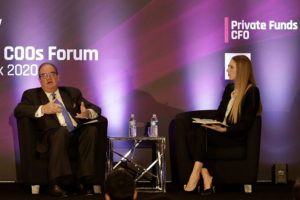 European Anti-Money Laundering and Know-Your-Client regulation will be the next big regulatory issue in the United States, Neuberger Berman chief operating officer Brien Smith said in remarks at the CFOs & COOs Forum in New York Wednesday.

“I don’t have a timeline, but if I were to guess that anything is coming [from Europe], it’s AML/KYC,” Smith said. In his remarks on regulatory developments, he looked to Europe as the leader of many universal regulatory changes, such as GDPR – Europe’s data privacy regulation – and ESG frameworks, that began on the continent.

AML and KYC regulation ensures that only legitimate, non-criminal investors contribute to your funds, and it requires institutions to monitor customer transactions and report suspicious behavior. Of course, PE firms are familiar with such measures, but it may be a long way off before full compliance reporting is automated.

“We’re getting close to getting full European compliance,” Smith said. “It’s a lot of regulation but really I think it’s best practices.” He views compliance to European regulation as a way for the US market to stay competitive with Europe.

Following Carl Thoma’s prediction that fee structures will contract this decade, Smith’s remarks highlighted that private market executives see big changes ahead for the industry. US financial firms have already been fined around $26 billion over the last decade for AML/KYC non-compliance.

The Neuberger Berman Group, which ranks 10th on the PEI 300 list of the largest private equity firms by funds raised in the past five years, was birthed out of Lehman Brothers following the global financial crisis. It manages $89 billion in AUM.