Pantheon and Partners Group, the two private markets firms that sought guidance from the Department of Labor in 2017, have over the years developed private equity strategies that can accommodate defined contribution plans in markets including the US, UK and Australia.

But what’s actually included in their US offerings? Both firms’ DC products in the US are offered as a collective investment trust – an investment vehicle similar to a US mutual fund but that is available only to qualified retirement plans such as 401(k) plans – and structured as a custom target date, target risk or balanced fund. These CITs invest in PE and have a liquidity component to manage the participant’s deposits and withdrawals.

For Partners Group, the largest component of their CIT portfolio is an evergreen PE fund which, per an SEC filing, is now $5.5 billion; a smaller part of the portfolio is in liquid securities and cash.

Robert Collins, managing director and head of the firm’s US distribution practice, told sister title Private Equity International that the firm’s offering is a hybrid structure, with an “overwhelming majority in a core, evergreen and highly diversified PE portfolio.”

The firm’s PE offering for the DC market is designed to be adopted by professionally managed or advised DC plans and incorporated in structures such as target-date funds.

Pantheon’s CIT, Pantheon Private Equity Select Fund, is understood to be an evergreen fund that invests in PE via secondaries, co-investment and primary investments and includes a portion allocated to liquid securities.

The CIT has a target PE allocation of around 70 percent, subject to fluctuation over time, per Douglas Keller, head of private wealth and defined contribution: “Pantheon’s private equity strategies are generally weighted heavily to the US and Europe, with a lower allocation to Asia – largely reflecting the evolution and maturity of the global PE market.”

Keller added the CIT focuses on the mid-market with diversification across stage, vintage year, sector, and, most importantly, manager. Both noted, however, that fiduciary oversight is important. Collins said Partners Group’s offering is overseen by fiduciaries on three levels: at the target date fund, the CIT level and at the evergreen structure within the CIT.

Pantheon may yet offer other customizable strategies to the US DC market depending on what the plan sponsor community may want exposure to.

The significant challenge for plan sponsors is getting invested and staying invested while the DC market is growing, Collins said.

“Pension plan sponsors need a product that is able to grow and scale, as there have been meaningful net positive inflows of these 401(k) plans into target date funds, even during downturns like the global financial crisis and even this year.” 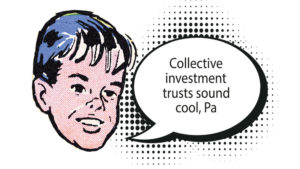 The Department of Labor’s release of guidance greenlighting DC investment in private equity has caused some market participants to wonder if the market can retain the prized privacy that comes with not being publicly traded or listed on an exchange, writes Connor Hussey.

“While there is a desire to have a new source of funds from consumers, they’d rather do that without the transparency,” says Justin Miller, managing partner at Bain & Company.

Pantheon and Partners Group, two of the large private market participants who have actively sought guidance from the DoL on this matter in recent years, have developed private equity strategies that can accommodate DC plans, which take the form of target-date funds.

Allowing DC plans to invest in private funds doesn’t translate to additional regulatory disclosure requirements. But Douglas Keller, head of private wealth and defined contribution at Pantheon, believes that as the DC market evolves, it is possible that Pantheon may offer other, customizable strategies to the US DC market, depending on what plan sponsors want exposure to.

That’s where the disclosure picture may change.

“If they were to suddenly let retail investors into private funds generally, I’m sure the disclosure would be pretty much the same as a public offering, which would be onerous,” says Marie DeFalco, fund formation and structuring partner at Lowenstein Sandler.

But there are other ways for GPs to tap into retail money on a broad scale, which wouldn’t immediately require additional disclosures, and much of it would likely begin by offloading the complexity to banks or other related service providers.

“The most likely way for all but the very biggest firms will be to work with an intermediary, and that intermediary will handle and absorb the complexity of dealing with a retail investor or 401(k) plan,” says Miller. “But you have to pay for that.”

Plan sponsors such as Vanguard, Schwab, Fidelity and others who manage these plans could perform their own sub-accounting and internal division of shares among participants, should they offer allocations to PE, says Miller.

But a disconnect exists between the managers and deal professionals who could benefit from billions of dollars of new capital streams, on the one hand, and the service providers and financial intermediaries that would likely have to manage much of the operational burden around reporting and document-keeping, on the other.

“We have a scenario here where everyone thinks it’s a great idea, people want to do it and none of the people that actually have the technology to record-keep these plans are interested in providing that service,” says Miller.

Outsourced record-keeping service providers such as Empower, Alight, or Ascensus do provide these services to a small number of clients, but adding potentially millions of 401(k) users and tracking illiquid investments may require significant effort and additional investment.

“I’ve talked to one or two administrators that do record keeping and administration, and they are not excited about having to deal with an illiquid investment at all,” says Miller.

Many of the CFOs and managers speaking with Private Funds CFO expressed concern at the risks the development poses down the line, and the inevitability of heightened reporting requirements should the industry see broad allocations among plan sponsors.

“The moment you have a crash or a market dip and people’s 401(k)s get plundered because they were all heavily allocated to PE, and PE takes a hit, you can imagine what the social response would be,” says one CFO.