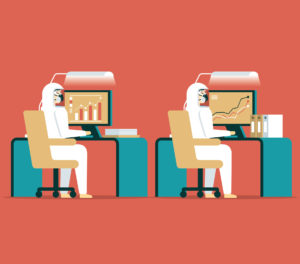 As Texas goes back to work, Houston-based EnCap Investments provides an early glimpse of what office re-integration may look like for many private equity firms.

The firm, ranked 21 in the PEI 300, began its office re-integration on May 18 after Texas became one of the first states to begin reopening its economy.

Craig Friou, deputy CFO and CCO at EnCap, told Private Funds CFO the firm began ‘phase one’ of its office re-integration by dividing staff up into ‘red’, ‘white’ and ‘blue’ teams. The red and blue teams alternate days in the office, with the white team, which includes some administrative staff, not returning at all for the time-being.

Splitting the firm’s workforce into different teams not only designates which days staff are allowed to be in the office, but also groups individual teams together (ie, finance team is red, deal team is blue, etc.), causing employees to only work in close proximity with their immediate teams.

The color-coded teams apply to all staff except for those at the partner level, who are free to come into the office on whichever days they like.

For EnCap, having only some of the firm’s administration staff return makes sense in the short term, as no outside visitors are permitted in the firm’s offices, Friou said.

“We have all these rules in place that will force us to work differently,” he added. “There’s no outside visitors, no travel and no common food catered to the office.”

Casual conversation in common areas is discouraged, as this leads to heightened risk of contact with others. However, if employees are to congregate in common areas, such as bathrooms, elevators or the office kitchen, personal protective equipment (PPE) such as masks are required.

In-person meetings are discouraged, but if a meeting room is used, it must respect a 25 percent occupancy rule. “Everybody sitting there has to count three empty chairs, and our all-hands meeting every Monday has to be virtual because there’s no way with that [many] people to get to 25 percent occupancy,” Friou said.

Returning to shared office spaces amid an ongoing covid-19 pandemic requires managers to prioritize employee health above all, Friou said, and for EnCap, that means surveying staff on their well-being daily.

“On our first day back, there’s a one-time certification, acknowledging that they understand the policies, and then there’s a daily certification, which basically has employees confirm they’re not sick, they don’t have symptoms, etc,” said Friou. “Because if they do, then they’re not allowed to come in.”

The firm also maintains an overriding policy that allows all employees to continue to work from home if they feel sick in any way or don’t feel safe returning to the office.

All EnCap’s immediate plans for re-integration follow what the State Government of Texas prescribes for businesses, and the State’s directives are quoted in the firm’s internal memos.

In conversations with Private Funds CFO in recent weeks, managers have said they are hesitant to be the first organizations returning to the office, as the threat of a re-spike in cases looms over short-term decision making.

Many PE sponsors are based in place like San Francisco, New York and Boston that still have in place public health orders that require or encourage them to work from home, said Douglas Brayley, labor and employment partner for Ropes & Gray. “Most [PE firms] have not yet opened up offices other than with a skeleton crew.”

Friou said EnCap is “not trying to be smarter than the [state] decision-makers.”

“If they say it’s safe to return, we’re following the timing they’re saying,” he said. “I’m a little bit more of the view that there’s nothing wrong with being careful, and I think that’s reflected in our policies.”