Private equity is a relationships-based business. Fund managers enter a partnership with investors and a multi-year collaboration with the portfolio companies they purchase. Several general partners have likened it to finding a good match for marriage.

It is inevitable, then, that a lot of schmoozing and networking goes on behind all the capital-raising, legal filings, and deal-making. But who picks up the tab when it comes to the entertainment, the travel, and all the sundry expenses that come with running an annual general meeting? It is a question that frequently comes up when trying to align interests between GPs and LPs.

“I think the biggest concern for LPs is the potential for conflicts of interest,” says fund administrator PEF Services co-founder and chief executive Anne Anquillare. “If the LP feels the GP is aggressive with regards to their expenses, and there is any hint of a conflict of interest, then that undermines trust.”

The degree of faith an LP can place in their GP will inevitably depend on the manner in which they disclose their fees and charges, and whether the investors feel the fund manager is sufficiently transparent. That’s easier said than done. The pfm Fees and Expenses Survey found 23 percent of GPs still don’t disclose their AGM budget to the LP advisory committee, whereas only 3.7 percent do. Just 11 percent said they disclosed the budget to all LPs, but over half said they don’t have a set budget. Also, it is no longer a blanket assumption that the GP pays for everything when it comes to AGM expenses.

The survey indicates a trend towards charging such expenses to the funds rather than the GP. This year, 68 percent of GPs said their funds absorbed the costs for meals and entertainment provided to the existing LPs. By comparison, just 53 percent of GPs said so in 2014. Similarly, 41 percent of GPs said the fund would be expected to pick up the tab when it comes to wining and dining the chief executives of their current portfolio companies, up from 33 percent two years ago.

“This is because the purpose of the annual meeting is to give the investors an opportunity to meet, talk, and rub shoulders with CEOs of the portfolio companies,” Anquillare says. “It gives them access to that one layer down to the actual people responsible for the performance of the fund.”

The bottom line is that it depends on who benefits from these activities. In the above case, it is the fund’s LPs who are considered to be the winners and hence they are paying the bill. But that decision doesn’t happen naturally. Angell emphasizes it’s about making investors comfortable with the allocations. To improve communication, GPs should be more detailed when outlining the fees and expenses in the LPA.

“It comes down to [the GPs] marketing to the LPs and whether they are comfortable with the allocations, and are willing to pay them because they want to be invested with that particular GP,” says Tom Angell, partner at accounting and consulting firm WithumSmith+Brown. “It becomes a marketing issue in fundraising – how is your competition handling these items compared to how you are handling them?” 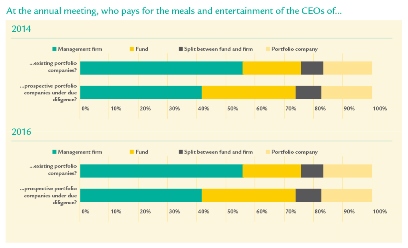 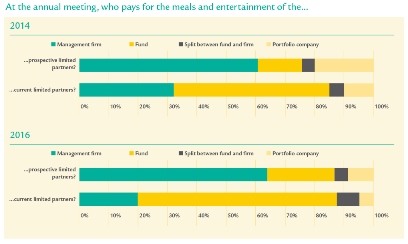