Since 2010, the Securities and Exchange Commission has been moving toward a more entrenched presence within the private equity industry. As a result, the SEC’s focus has advanced beyond valuations and marketing to fees and expenses, operating partners, co-investments and separate accounts – all of which have an effect on current funds as well as those emerging managers coming to market.

The SEC’s most recent enforcement efforts have concentrated on fees and expenses, specifically the shifting or misallocation of expenses, and failure to disclose conflicts of interest. The latter, in particular, pertains to consulting agreements and fees and payments from portfolio companies to affiliates of the advisor.

When comparing the results of the pfm 2016 fees and expenses survey to those from 2014, the SEC’s focus on fees has clearly started to alter the behavior of managers. As expected, over 80 percent of respondents said they look to the LPA for guidance on how fees and expenses should be allocated. Consequently, the LPA has become more detailed.

Even so, in many instances, the LPA may not necessarily address all fees and expenses in its initial draft as the document will often only include basic and broad language. This can pose a significant challenge. When this situation occurs, 43.5 percent of the survey respondents say they will leave it to the management team to decide how to allocate those items which are not in the LPA. This also extends to cases where they are consulted on the allocation. Despite this effective twofold remedy, all of the LPs may not always be satisfied.

Pressures from both the LPs and the SEC have had a significant impact on management fee offsets. As the current environment demands complete transparency on fees, there has been pressure from LPs who want to benefit from payments made to the management firm. After trending higher in the past several years, 100 percent offset on management fees is becoming the norm, though around a quarter of respondents say they still only offset management fees by 80 percent or less.

The assumption would be that 100 percent of the proceeds would be used to offset management fees. In short, broken deal expenses and proceeds are treated differently by the funds.

Of particular interest is when a manager starts charging management fees and when it stops. For example, over half of the responding managers indicated – quite logically – that management fees are charged upon the first closing of the fund. However, a fund can often extend its life via extension periods as permitted by its LPA and in some cases continue to operate past permissible extension periods to liquidate remaining investments in an orderly manner. Approximately 71 percent continue to charge management fees during these extension periods. In such instances, managers need to be cognizant of conflicts of interest related to any GP-led restructurings or fund recapitalizations related to end-of-life scenarios.

Monitoring fees also become a big focus for the SEC, particularly since funds often have portfolio companies sign a fee agreement for a 10-year period. Upon a termination event, such as an IPO or sale, the remaining life of the agreement would be accelerated. Although 28 percent of respondents do not charge monitoring fees, nearly 63 percent of those charging such fees have a 100 percent offset. Since the SEC has frowned upon 10-year agreements, Blackstone, as well as others in the industry, has dropped the acceleration provision.

Another fee and expense area to come under SEC review concerns activities and practices surrounding co-investment. Traditionally used by fund managers to close larger deals than they would have been able to do with a standalone fund, only certain LPs and other outside investors are invited to participate. Many co-investment vehicles are charged a reduced management fee or carry, or no fee or carry at all. This way LPs can enhance their returns by making additional investment in deals that have reduced or no expenses.

The SEC is concerned that fund managers were cherry-picking deals for the co-investments. It is also a concern that not all LPs were allowed to participate or were unaware that the practice was going on in the fund. Currently, a little more than 50 percent of the survey respondents said they charged co-investment vehicles management fees equal to, or less than, those charge to the commingled fund. Meanwhile, approximately 61 percent charged carry equal to, or less than, than that charge to the main fund.

In today’s environment, clarity and equitable allocation of fees and expenses are the new normal for investment managers. From reviewing current fee and expense allocations to potential conflicts of interest and their disclosure to LPs, 100 percent of respondents and industry thought leaders agree: this is just the beginning of the SEC’s efforts to enhance and sustain transparency industry-wide. 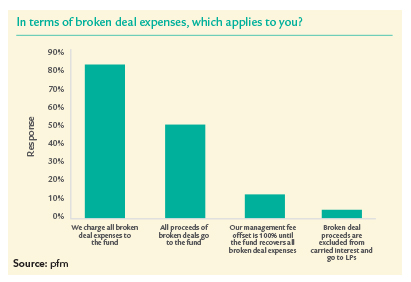 What percentage of your transaction or monitoring fee is offset against your management fees?

Do you charge management fees during extension periods?

This article is sponsored by WithumSmith+Brown. It appeared in the Fees and Expenses Survey 2016 supplement published with pfm.