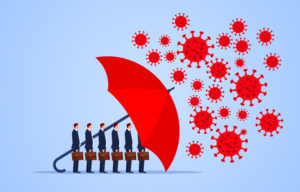 American regulators say they want to cut private funds some slack during the coronavirus crisis, but compliance officials have to take care they don’t pull enough rope to hang themselves.

Since the crisis began taking on its ghastly dimensions, regulators have announced new “relief” nearly weekly, and sometimes daily. Over just the month to mid-April, the SEC eased restrictions on intrafund lending, extended the deadline for Form PF and Form ADV filings, and given permission to hold remote board meetings. But given the pressures to find cash amid the worldwide bonfire, that regulatory relief means compliance officers have to be even more careful, experts caution.

Delston has spent most of his career helping firms prevent money laundering. He says that he’s worried that sales teams are going to more vulnerable to hucksters as the scenery collapses around the world economy.

“They’re in some ways like the virus – once they attach to you, it’s hard to get rid of them,” he tells Private Funds CFO. “Unlike the coronavirus, they’re not going to kill you, but they’re going to be with you a long time. It’s better to stop them at the door rather than let them into your institutions.”

It’s harder to hear “no” any time, but especially now – and especially because many funds, desperate for liquidity, already see their compliance teams as “cost centers,” Delston says.

How, then, to convince management to keep their heads about them while all around are losing theirs and blaming compliance?  Delston suggests three kinds of conversations:

Show executives fraud enforcement cases, even if they are from different areas of the law or the market. “Management often pays attention when there are large amounts of money in penalties, or possible criminal prosecution.”

Remind managers of the “high incidences of fraud that arise in a pandemic,” he says. “Firms selling miracle cures, websites touting vitamins: all sorts of fraudsters come out of the woodwork during a crisis, and those fraudsters can be clients of the funds” if compliance teams aren’t careful.

Keep your eyes out for Ponzi schemes unraveling. “That’s part of the financial landscape,” Delston says. Now that investors are facing liquidity crises, they’re likely to try to redeem their funds. When the redemptions can’t be met, the Ponzi schemes will unravel.

“Looking at sources of funds of clients is as important, or even more important than it’s ever been,” Delston says. “That’s not to say that compliance won’t get overruled by the business. It’s a chronic debate that most compliance officers face on a daily basis.”

If fear of money-laundering isn’t enough to get compliance to focus on the kinds of customers sales teams are bringing in, pending changes to the SEC’s advertising rule raise the stakes.

An increasing number of public voices have urged the SEC to pause any non-virus rulemaking. But no one thinks that the status quo can hold: the advertising rule hasn’t been updated since the 1960s.

“What is clear is that the definition is going to change,” says Kelley Howes, a partner at Morrison & Foerster in Denver. “The things that the private fund advisors are used to being able to do in a one-or-one context, they may have to rethink that. A document that goes to two potential clients instead of just one: That’s going to be a significant shift.”

“I think it’s causing compliance people a lot of heartburn. How are they supposed to work that into an actual set of procedures that they can deploy, or even answer day-to-day questions that they’re going to get from folks on the ground?” says Wolfe. “While all that’s going on in the background, I think the marketing people see it as a win. They can use testimonials, past performance, things like that in ways they couldn’t before, in media they couldn’t before.”

Wolfe suggests that compliance officers take two steps. First, conduct a SWOT analysis – strengths, weaknesses, opportunities and threats – of current policies and procedures and contrast them against the proposed rules. “Once you have that framework, you start thinking about the particular kind of clients that we deal with? How do my folks use e-mail, Twitter, radio; how do they fit in with my framework?” he says.

Second, Wolfe urges compliance teams to redraft P&Ps as if any future rules are going to be onerous.

“Understanding that different businesses are going to have different risk appetites, I would generally promote a program around the most restrictive rule, or the most restrictive interpretation of a rule. I think that’s going to be the most defensible,” he says. “You can say, ‘Look, we tried to build policies and procedures that didn’t even come close to toeing the line.’”

Given the latent tensions between compliance and marketing/sales, Wolfe suggests that compliance officers begin managing up so that top officials at private fund advisors understand how important these changes are.

“Whoever is the person at the top, they have got to make it clear that they stand with compliance, that they have compliance’s back. You don’t want to wait for some sales guy to go rogue on Twitter.”

Howes says the proposed rule “will be a significant infrastructure change” for compliance teams “because they’re going to have to keep records of all these things.”

“If an advertisement includes certain broadcasts, is there a script? Are you reviewing that?” she says. “If there’s a public Q&A that you can’t control, compliance people will have to put together some kind of training for the people who are out there, and continually update that training.”

Wolfe and Howes agree that new advertising rules are also going to require private funds to take a careful look at what kind of investors they’re talking with.

“If you’re a private fund equity advisor and you’re out there trying to raise money, you’re talking to investors or potential investors. In those pooled investment vehicles, you’re going to have to know whether you’re talking to a retail or non-retail investor,” Howes says.

Under the rules, an accredited investor wouldn’t necessarily be considered a non-retail investor, Howes says.

“That’s a fundamental shift. Many private funds are relying on an exemption under the Investment Company Act. But you’re going to have to use the retail rules in marketing that pool because they’re not qualified under that.”

“Six months ago, it probably wouldn’t have been material information if a flight got grounded because someone got sick,” he tells Private Funds CFO. “Today, it could potentially lead to a sell-off of a stock.”

That means that compliance officials have to look way beyond the C-suite and mid-level management for insider trading. Oil rig workers, hotel maids, blackjack dealers – any number of front-line workers could be sitting on a wealth of wealth-making details, Birnbaum says.

“This is a good time to make sure your employees are reminded of the policies and procedures – and to make sure your contractors are brought up to speed – because a lot of people are going to have access to material nonpublic information.”