The Securities and Exchange Commission’s change to its accredited investor definition may only help those with established wealth management channels, CFOs of mid-market firms tell Private Funds CFO.

This recent change widens that pool of investors marginally to include investment professionals and other individuals qualifying as “sophisticated investors”, but still represents a very small portion of main street.

“Instead of being the top 1 percent of the 1 percent you’re giving better access to the top 2 percent,” Cherry-Seto says.

“I wouldn’t expect many people who did not fall within the previous definition of accredited investor to suddenly decide the invest in such products,” says Dimitri Korvyakov, CFO of Sandton Capital.

For mid-market firms it’s seen as a political move meant to signal the maturity and increasing harmonization of the alternatives industry.

However small it may be, there are new investors gaining access to private markets, and investment managers involved should expect some degree of oversight in these transactions.

“The relaxation of rules often come with more requirements from investment managers, so the next step is to see what implications it will have … in terms of reporting, and whatever else falls within the concept of regulatory compliance [for this new pool of investors],” says Korvyakov.

The rule change comes in tandem with the Department of Labor guidance green-lighting defined contribution plans to invest in alternatives.

For firms with large wealth management practices and large teams of compliance professionals, this could mean a welcomed new source of capital. But for mid-market firms with a smaller in-house team, the compliance burden isn’t worth the risk.

“We’re not interested in taking 401(k) dollars right now because of the risks of oversight and compliance, which they have not simplified yet,” says Cherry-Seto.

“In fact, it’s become more complicated in terms of compliance requirements for small pools of capital, like a 401(k)’s, as opposed to our LPs that are ERISA dollars.”

It will likely be years before 401(k) plans have wide access to private markets, but regardless of whether the industry is ready to help facilitate the inclusion of these new investors, regulators and other officials are moving forward.

“These newly minted accredited investors are not your typical mom-and-pop retail investors, a fact that should assuage the concerns of those that fear any expansion of the definition,” Republican commissioner Hester Peirce said in announcing her support for the new rules.

“It does not assuage my concerns. Why shouldn’t mom-and-pop retail investors be allowed to invest in private offerings? Why should I, as a regulator, decide what other Americans do with their money?” 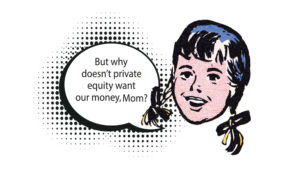 Any regulatory actions taken since June – and that includes the Department of Labor’s ERISA guidance and the SEC’s widened definition of accredited investors – are subject to Congressional review … in the next Congress. It is possible that these baby steps will falter under a President Biden.

Private funds seem to have gleaned the same point: through their PACs, they’ve donated tens of millions to more conservative Democrats so far. That may well help soften the blows, but it won’t prevent them from coming.

If the Dems win the Senate, Sherrod Brown, D-Ohio, will chair the Senate Banking Committee and Elizabeth Warren, D-Mass, will chair its subcommittee on financial institutions and consumer protection. The raspy and rugged Brown is an old-school union Democrat who used to dominate his party. The American Federation of Labor and Congress of Industrial Organizations has lobbied fiercely against expanding private funds to retail investors. At a minimum, they’ll have a veto on any regulatory and Cabinet nominations from a President Biden.

State regulators hate the moves by the SEC and DoL. They can’t reverse them but can certainly pursue private funds enforcements. “When we come across big enforcement cases, we’re going to make sure folks hear about that,” says Chris Gerold, chief of New Jersey’s Bureau of Securities and president of the North American Securities Administrators Association, a Washington, DC-based advocacy group.

“We’re going to do our best to track these changes. It’s not that we think that all private funds are frauds. It’s that we have concerns that we don’t know if they’re frauds, and determining it is very difficult.”

States’ ongoing pension crises have created a lot of political pressure, and private funds could find themselves as America’s next top public enemies.

The suit alleges that the funds’ sales representatives misled trustees of the commonwealth’s public pension systems by pitching them up to $1.5 billion in fund-of-funds investments.

The suit focuses on hedge funds and may go nowhere, but funds could make a tempting target for ambitious politicos in cash-strapped states.

In July, barely a month after DoL issued its ERISA guidance letter, Federal Reserve vice-chairman Randal Quarles issued a letter of his own, on the stationary of the Financial Stability Board he chairs. Many saw it as a whiff of grapeshot aimed at PE.

“The impact of the covid event on credit markets has highlighted vulnerabilities in the NBFI sector related to liquidity mismatches, leverage and interconnectedness, and investor behavior related to certain funds that they may treat as cash equivalents during economic calm but not during crisis,” Quarles wrote. “Understanding risk, risk transmission and policy implications for the NBFI sector is more important than ever.”

The FSB has formed its own study group on the matter and its report is due before a G20 meeting in November.