Delegates at Private Equity International‘s Operating Partners Forum: Europe 2019 were asked on Tuesday morning to consider that “everything that can be automated, will be automated.”

Anubhav Saxena, executive vice-president of Automation Anywhere – one of the leading providers of robotic process automation technology – walked delegates through the mechanics of the automation revolution and painted a picture of the workforce and economy of the future.

Robotic process automation is currently being deployed by many financial services firms and involves the application of software robots to repetitive, data-based tasks (extracting, inputting, enriching data and so on) that up until now would have been performed by humans.

Saxena described an example process of having a software bot sitting on the computer desktop of a human accounts payable clerk, tracking and learning their movements and decisions over a period of time.

If and when that human worker leaves, should he or she be replaced by another human – which involves an imperfect hiring process – or by the software robot that has learnt the role and works 24 hours a day without stopping to look at Facebook?

Once this accounts payable software robot is up and running, it can be replicated and made available to other clients who need to hire an accounts payable clerk. The hiring company then has better visibility over that worker’s track record – how many times it has been deployed, how it has been reviewed and exactly what skills it has – that it would ever have for a human candidate. 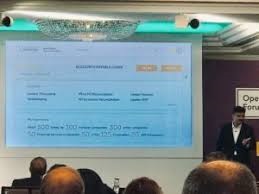 “What if you had a profile for a download of a bot with a track record?” asked Saxena.

Saxena drew a parallel between the advent of automation and the arrival of tractors to agriculture, looms to textiles or the assembly line to the automotive industry. “This is our industry – business process outsourcing or IT – going through its automation, and it won’t take 100 years.”

By 2021, 150 million jobs will have been replaced by robots, noted Saxena, although he quelled the fears of his audience: “not anyone in this room.”

He asked delegates to consider their own futures: “What will your role be in the bot economy?”

The Operating Partners Forum: Europe 2019 is taking place in London on Tuesday and Wednesday.

In June we will be publishing a deep dive into how robots – in the form of both RPA and artificial intelligence – are changing private equity firms’ operations forever.